The awards pay tribute to the special people in our community who have gone above and beyond to help improve the lives of others and contribute to a diverse, friendly and strong community.

This special person could be your neighbour, a friend or someone you have come across through your local school, church or community group. Whoever comes to mind, they are someone who works selflessly to help improve your life and the lives of others.

Thank you to all nominees for your commitment to the Townsville community. The winners were announced at the 2023 Australia Day festivities held at The Ville Resort-Casino on Wednesday 25 January 2023. 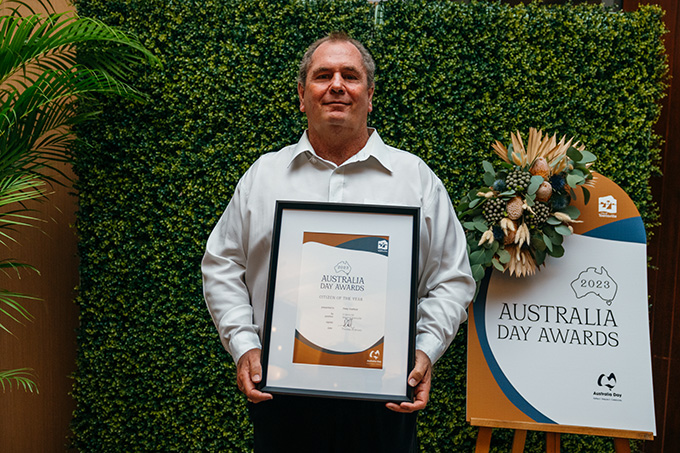 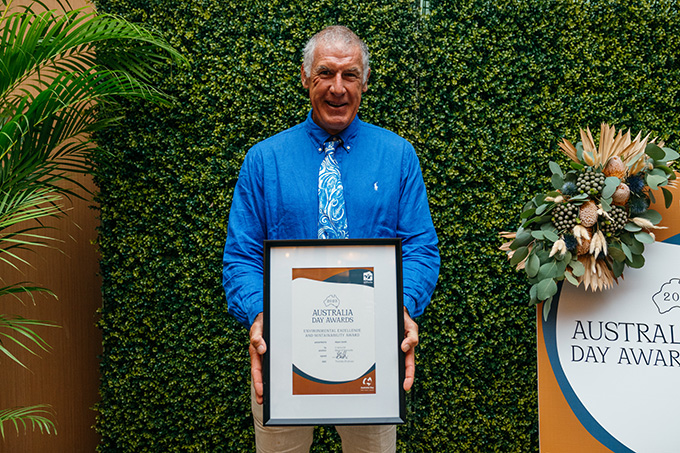 Nominated for his volunteer work across several local organisations including Eyes Front, Pirates Masters Rugby League, Life Skills Queensland, Ronald McDonald House, Brain Foundation and Hounds4Healing. Peter has also established his own “Enduring Spirit” brand and launched an online store, with all proceeds going to charity. Peter is recognised for all of the amazing work he does for the Townsville community.

Peter recently participated in a 300km walk from Townsville to Airlie Beach to raise funds for Eyes Front projects assisting ADF veterans. He individually made all event arrangements including permits, accommodation, meals and support vehicle requirements and raised $9,000. Continuing to go above and beyond, Peter co-authored a book on humorous military trade stories, donating all profits to supporting current service men and woman and veterans. He also participated in an ADF veteran master's Rugby League match raising over $3,000 for legacy.

At just 11 years old, Kobe registered with the Ponytail Project to honour his beloved Opa, Chuck, who passed away from prostate cancer. Kobe hopes to create a legacy to inspire many more people to register to donate their ponytails, and to raise money so scientists can work on finding a cure for cancer. His goal aligns with the Cancer Council's mission to improve quality of life for people living with cancer through research, patient care, prevention, and early detection.

Kobe's #RockTheChop event in October 2022 was the official launch of the Ponytail Project in Townsville, and together with his campaign, raised more than $16,000 which will be donated directly to the Cancer Council's Gluyas Rotary Lodge. Kobe is an amazing ambassador for the Ponytail Project and has shown confidence and maturity beyond his years. His story will be used to help promote more Ponytail Project registrations, especially amongst boys, so they can see not only girls can #RockTheChop in 2023 and beyond.

Maree, volunteers tirelessly with Townsville City Council’s Galleries team. Regardless of the task, be it cutting up hundreds of pieces of paper, helping children build and create, encouraging teens at the teen workshops or helping clean up the huge messes after an under 5s workshop, Maree is always there volunteering with a smile on her face.

Nominated for his volunteer work with the Kirwan Scout Group. Darren is recognised for his commitment to fostering positive relationships in the broader Townsville community, and his dedication to helping youth reach their potential, while supporting youth leaders.

Darren also started the Townsville Outlaws Masters Rugby League Football Club, encouraging over-35s to return to the game of rugby league football and promote health and well-being amongst players. He is recognised for his dedication to improving the lives of youth through scouts and sports and for never shying away from a challenge.

Darren is an inspiration to both young and older people alike, from all backgrounds and all walks of life. His dedication to improving the lives and imagination of young people though the Scout Movement, sharing yarns, finding common ground with Indigenous Australians united in sport, and encouraging older football players to get back on the field, make him the 2023 Community Volunteer.

In June 2022, Allan, a local Rescue Helicopter specialist, competed and won the world’s toughest road cycling race: the 5000km Race Across America. Winning the event in just 9 days, 23 hours and 40 minutes and beating 35 other competitors from across the globe, the event was live tracked to those supporters back home. As Allan worked towards competing in the event, he used his profile to support and assist in raising both funds for education and awareness of maintaining good mental health.

When not preparing for endurance events, Allan raises much needed funds to support positive mental health of emergency and frontline workers. Allan is heavily involved with Selectability through speaking events and assisting with Bike Sheds, where people can connect, work on projects, join in group bike rides and improve their mental wellbeing in Townsville and surrounding areas.

A member of Townsville Central Little Athletics for 10 years, Zoe not only participates as an athlete, but also with the general running of the club, regularly setting up and running warmups, as well as undertaking athletics coaching to train younger athletes for state events.

In addition to her tireless club work, Zoe reached one of her major milestones last year by being selected to represent Australia at the Oceania Championships. She went on to win this event and achieve a new meet record. Zoe is a wonderful ambassador for athletics in North Queensland.

Adam is known for his dedication to community initiatives including efforts to improve the environmental footprint of his hometown and mentoring both university and school students. An Associate Adjunct Professor at James Cook University, Adam frequently works with and volunteers time in support of other organisations such as the Museum of Underwater Art, iNaturalist, Reef Check, Eye on the Reef, Reef Life Survey, Coral Watch and Shark Count.