You are here: Home Community Support Community Safety Disaster Management Before a Disaster Know Your Risks

Types of natural disaster events, which may affect the Townsville area, include: 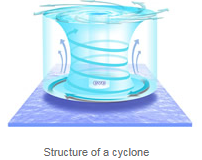 A tropical cyclone is a massive collection of whirling wind and dense cloud mass, spiralling clockwise around a central eye of exceptional low pressure. With winds reaching speeds in excess of 200km/h, cyclones can be extremely dangerous. On average, ten (10) cyclones occur in the Australian region each year. The Bureau of Meteorology keeps the public informed by issuing cyclone watches and warnings, which are available on their website.

Things to do once a cyclone warning is issued and cyclone impact is imminent:

A storm tide is a rise above the tidal water level along a shore that is associated with a tropical cyclone. Storm tides will be accompanied by gale force winds, with successive waves of seawater rapidly moving across the foreshore. King tides are a natural phenomenon that result in lower lying sections of Townsville being inundated, namely around Railway Estate, South Townsville and parts of Hermit Park.

The biggest king tides usually take place in January and February; however, if they coincide with heavy rain, water levels tend to be even higher than the predicted level. Before king tide events, council crews inspect and ensure the proper operation of all tidal valves and gates to assist in flood mitigation.

If you live in a suburb prone to king tides, you should heed warnings and take precautionary action by moving items to higher ground where necessary. Motorists should also exercise caution and avoid driving through saltwater on the roads wherever possible.  If you are new to the Townsville area, speak to your neighbours and ask if your area is affected by king tides.

To prevent the entry of water under doors, you can also use plastic shopping bags or garbage bags partly filled with sand or soil. These will provide a good seal if packed tightly.

Townsville is built on a natural floodplain of the Ross and Bohle Rivers. For residents, this means living with the best and worst of our local climate. More than 300 days of sunshine each year can be tempered with our traditional wet season, which runs from November to March each year. Flooding in Townsville is generally caused by heavy rain from a cyclone or rain depression crossing the coastline. This can sometimes result in local flooding to streets, yards and in extreme events, homes.

In the event of a combination of heavy rain, strong winds and high tides, low-lying areas such as Railway Estate, Oonoonba, South Townsville, parts of Hermit Park, and beachside communities need to take extra precaution. This means moving items to higher ground where possible. Avoid parking your car on the street, as saltwater can cause permanent damage.

Every year, bushfires put the lives and properties of Queenslanders at risk. You don’t have to live in the bush to be threatened by bushfire, just close enough to be affected by burning material, embers and smoke. The Townsville area is traditionally very dry and all residents have a part to play in bushfire mitigation.

Bushfire season normally commences in North Queensland in July and progresses through to southern areas of the state as Spring approaches. These timeframes can vary significantly from year to year, depending on the fuel loads, long-term climate and short-term weather conditions in each area.

Residents are likely to be at a heightened risk of bushfire if:

Visit the Rural Fire Services website for bushfire warnings and to find out more about preparing your home for potential bushfire threats.

A tsunami is a series of waves generated by a sudden upward movement of the ocean floor due to earthquakes. Tsunamis can also be generated by undersea landslides, volcanic eruptions, and meteorite impacts.

A tsunami can travel great distances, sometimes across entire oceans, at up to 950 km/h in the open sea. It can range from a few centimetres in height offshore to many metres high once the wave slows down and shoals in shallow water.

The Tsunami Evacuation Guide provides detailed maps on the risk to areas around the Townsville region and advice on what to do in the event of a tsunami.  If a tsunami warning is issued, quickly move inland and uphill.

Earthquakes are recognised as the most devastating and unpredictable natural disaster known to human civilisation. They strike without warning at any place, at any time and can be of any size.

In any urban or rural area, where significant development has taken place and/or is planned for the future (such as critical facilities, infrastructure, and local development), an increasing concern is that of potential damage from earthquake.

Landslides are typically associated with heavy rainfall.  Landslides can grow in volume with the addition of water, sand, mud, boulders, trees and other materials.

While landslides are not overly common in North Queensland, there have been two (2) events over the past 20 years that were triggered by the heavy rain associated with tropical cyclones.

On 10 January 1998, a landslide on Magnetic Island was triggered by torrential rain as a result of ex-Tropical Cyclone Sid, destroying 10 units and resulting in 60 tourists being evacuated from the area.

On the night of 3 April 2000, two (2) landslides occurred on the northern slope of Castle Hill as a result of torrential rainfall from Tropical Cyclone Tessi. The landslide occurred within a short period of time and posed a high risk to homes, resulting in the evacuation of numerous residents.

Another area which has often been cut by landslides during high rainfall events is the road to Paluma/Mt Spec.

Council and State Government agencies undertook a major operation to secure the slopes to a degree of safety. Mitigation works have been carried out since that time to protect these homes from any further landslides.

Visit the Queensland Government's Pandemic Influenza site.  This site provides information for the general public, health professionals and industry on how pandemic influenza could affect them in the future and the best way to prepare.

01
Jan
Make Your Move in May
Active Transport is a great way to fit physical activity in your daily life and is good for your health, wallet, mind and the environment! Sign up to for your chance to win great weekly prizes!